“I feel back to front. Things other people find easy I find difficult and vice versa” 21 year old Alex Manners says of his Asperger’s condition, a form of Autism. Alex, who was diagnosed at 10 was told by his dad that many of his family had Asperger traits and that it gave them “special powers”. Alex believed him and has channelled his Asperger’s into something remarkably positive ever since.

Alex has championed the cause for autism sufferers for a number of years proving himself a true ambassador. He says he feels ‘lucky’ to have Asperger’s now so he can use his experience with the condition to help others.

Alex, a recent Solihull College & University Centre Media Production graduate, is now turning his attention to the footballing world. A keen football fan, he films all Solihull Moors FC home games for BT Sport donning his colourful outfits – his signature look. He interviews managers and is currently undergoing a quest to watch a match at all 92 Football League grounds.

Well aware what the world can feel like to a number of Autism sufferers, Alex started his own campaign to raise awareness and discuss solutions as a way to combat difficulties faced by autistic fans. ‘I love football, but there are areas that are difficult for me when attending a game’ Alex admits. Taking into consideration sensory overload, personal space between seats, turnstiles and more, Alex now carries out talks and has written several essays on ‘Autism & Football’.

He was recently invited to visit Arsenal Football Club and their sensory room for Autistic fans. The sensory room is credit to the Shippey Campaign, which was created by the parents of three children with Autism. ‘I was overwhelmed by how much the club understood autism, how each item was used and how the children use them’. The sensory room is aimed at children but there is also a viewing window for people with autism to watch the game.

‘Ideally I’d like all clubs to comply with providing a certain number of spaces for autistic fans’ Alex states. The closeness of seats and lack of personal space is often one of the most difficult aspects for Autistic fans. Some clubs are already looking into providing special areas like Arsenal but others are yet to take the step.

Luke Howard, Arsenal’s Community Disability Officer was delighted to welcome Alex to the club, “We put a lot of thought in to how we can adapt the match day experience to ensure that we offer a variety of environments to suit the needs and preferences of our fans. This has included the development of our sensory room facilities – allowing us to offer the opportunity to engage as a fan to those with autism and who are more sensitive to sensory hyper sensitivity. Alex is an inspirational young man who has the charisma and ambition to help highlight diversity to the mainstream audience”.

Next on the agenda for Alex is speaking at the National Autism Show in London in June. He continues to work towards his lifelong dream of being a children’s television presenter. On the subject of his campaign Alex has been invited to attend Arsenal’s game against Burnley on Sunday 6th May and to watch the game from the clubs sensory room. He had an article published in the May/June 2018 edition of the SEN (Special Educational Needs) magazine titled “Footballs goals for autism” which looks at what football clubs are doing to help improve the match day experience for people with Autism. He has also worked at pitching the idea for an Autism and Football documentary to different TV channels and production companies. 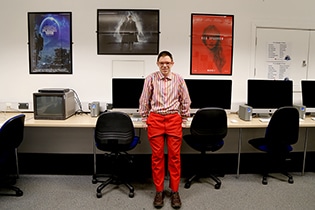