Computing apprentice Mateusz Sromala, 21 from Birmingham, has been shortlisted for the Chamber of Commerce’s ‘Outstanding Apprentice’ category at the Solihull Chamber Annual Dinner and Awards 2018.

Matt successfully completed an 18 month apprenticeship working 4 days a week as an IT Technician at Bathroom City in Tyseley, as well as attending Solihull College & University Centre one day per week to complete his Subsidiary Technical Diploma and Cisco qualifications.

‘I received good A-level results but university didn’t appeal to me, I hated the idea of owing anyone money’ he states, ‘the thought of studying and ending up after it with a debt just didn’t make sense to me, so I applied for an apprenticeship’.

Matt started at Bathroom City completing software work, creating efficiency processes and creating forms. Matt demonstrated a strong interest and aptitude for IT from the outset having previously carried out work experience in a software development role. This natural aptitude combined with the opportunity to utilise his skills in a working environment allowed Matt to develop rapidly in his role. ‘I quickly found a way to save time in processing things’ Matt adds ‘my IT Manager left and I was the go to person for a while, then my role developed more into intranet work, content creation and sales reports.’ Matt had the ability to effectively recognise where business processes could be streamlined and proactively offer solutions following liaison with his colleagues and internal customers.

‘When my parents moved to the Isle of Man I had to move in to a place on my own and I was hired full time at Bathroom City as a Junior Developer after. I hope to go on to finish Level 4 at some point in the future. I think an apprenticeship is beneficial in my industry. University students come out with a degree but you get real practical work experience and get paid. I value the workplace aspect’.

Dave Weir, Manager of Bathroom City added ‘Matt has been an outstanding apprentice, he has done everything he’s been asked to and more. We pride ourselves on joining with Solihull College on this apprenticeship scheme, we truly enjoy helping young people get on to the employment ladder. Matt has been invaluable to the business from the very early stages. One particular business process that used to take 6 months now only takes 1 week’.

Rachel Fisken, Matt’s IT Assessor and nominator stated ‘I have worked with Matt for the duration of his Level 3 Diploma in ICT Professional Competence and throughout the 18 month programme it has been a pleasure and a privilege to watch such a talented young apprentice develop both technically and professionally. Matt’s ambitious drive and talent resulted in the apprenticeship being completed 3 months ahead of schedule’.

On his award Matt remains humble stating how surprised and flattered he was that Rachel had nominated him. Matt will find out if he has been successful at the Solihull Annual Dinner & Awards on the 18th October when the winner will be announced. 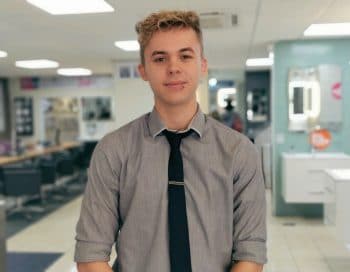