The Big Sleuth roars into College

The Big Sleuth roars into College

Solihull College & University Centre has a new guest in town for the next 10 weeks. ‘The Gas Street Bearsin’ is the College’s sponsored bear provided by local artist Megan Evans for The Big Sleuth. The 10 week free public art trail is a visually striking fundraiser for Birmingham Children’s Hospital partnered with Wild in Art. Following in the footsteps of its predecessor The Big Hoot, The Big Sleuth consists of over 230 bears taking up residence all around Birmingham for the public to find. 100 bears have been designed by local artists with a further 137 bear cubs designed by schools and children as part of The Big Sleuth Learning Programme.

Hoping to inspire creativity and fun whilst exploring the trail around Birmingham, the bears will be auctioned off for charity at the end of their 10 week residences.

The Gas Street Bearsin can be found outside the college entrance and is inspired by the popular television series Peaky Blinders. He wears a classic suit, peak hat and has two scenes of Birmingham’s canal systems on his stomach. ‘I wanted to create a story that connected with Birmingham’ states artist Megan, who works full time as a tattoo artist. ‘I was overwhelmed to be chosen by Solihull College & University Centre for The Big Sleuth and couldn’t wait to get started. I loved every second of bringing him to life’.

The Gas Street Bearsin took 90 hours to complete. Receiving only a blank fiberglass bear canvas to work with, Megan worked in an artist space in Birmingham centre alongside other talented artists. ‘It’s brilliant to be able to help such a great cause like Birmingham Children’s Hospital. My partner has worked for BCH for a number of years now, and I see first-hand the incredible things they do for children, not just from Birmingham but from all over the UK, so it means so much more to be involved.’

The Gas Street Bearsin isn’t only a visually complementary guest to have on site, but he also reveals an exciting hidden prize. Downloading The Big Sleuth app and entering the bear’s code at The Gas Street Bearsin will allow members of the public to access a free tour of the college’s Animal Management Centre. The centre contains an array of creatures including meerkats, parrots, donkeys, snakes and more.

The Big Sleuth adventure runs from 10th July until 17th September with bears spanning multiple areas from Erdington to Harborne to Handsworth Park and beyond. 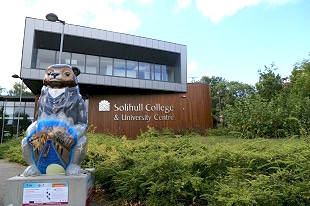