Cameron O’Connell who is currently studying towards his technical qualifications at Solihull College & University Centre has been awarded with a STEGTA Excellence Award for Outstanding Performance in Rail Engineering Design.

Cameron is one of the only students in the UK who is currently studying towards his BTEC Level 3 and HNC qualifications concurrently and is also part of the government’s first trailblazer railway apprenticeship scheme. Cameron is currently on track to complete both his apprenticeship and his HNC with distinction grades. He comments “I chose an apprenticeship as I wanted to take on a new career after the Army. Solihull College provides great facilities and has a great reputation as my brother finished his HNC in electrical engineering and has gone on to do his degree. The support I receive from the College is great; the teachers are a great inspiration to me and other students and the library and I.T facilities really help with gaining high grades. The support from the College staff to take on two courses and a full-time job has helped me become a better engineer and a better student.”

Due to Cameron’s hard work within the engineering industry and on his apprenticeship he was chosen as the successful individual to be awarded with STEGTA’s Outstanding Performance in Rail Engineering Design award.

STEGTA was established in 1966 to act as the central training department for a small number of engineering companies in the Salford area and since then has grown substantially, now attending to the training needs of hundreds of companies throughout the UK.

Cameron currently works for AMEY and was presented his award at his office in Birmingham by STEGTA’s Business Development Officer, Louise O’Toole.

Upon receiving the award Cameron said “I was ecstatic that I received the award for rail design engineering and it was through hard work and encouragement from my employer Amey. I am thankful for the team at STEGTA and also the support provided at AMEY, the people I have worked with have been amazing, the constant push to achieve more and become a better engineer has helped me succeed in this early part of my career.”

Cameron has now been promoted from his apprenticeship with AMEY to a trainee Electrical and Plant Engineer and hopes to keep progressing within his career to become a Senior/Principal Engineer within the next 5 years.

Cameron’s Training Officer Helen Wilson said “I have selected Cameron for this award as I feel he has excelled with his apprenticeship. From the start he has always been keen to move quickly with his targets and has achieved them above and beyond what was set. He also has achieved distinction level at College throughout his qualification. He has a clear plan for his future and conducts himself professionally with others to achieve this.” 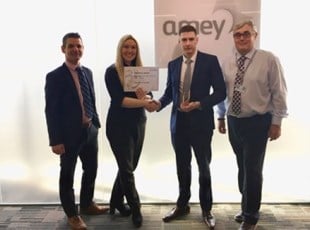