Solihull College & University Centre has partnered with Birmingham City Ladies Football Club for a number of years to offer a ladies football academy to its students.

The football academy has gone from strength to strength in recent years, attracting many young professionals from not only the local area but further afield, and winning league titles and cups along the way.

This season was no different for the academy squad as they have just secured the league title in the English Colleges FA Category 1 league. The ladies faced tough opposition this year in the form of Reading’s John Madejski Academy, SGS Women’s and CAVC Bluebirds Women’s, however, they managed to secure 6 wins out of 6 and retain the league title.

Academy coach, Louis Sowe commented “It is always our aim to retain the league title and at the start of this season myself and the squad were clear on this aim. We understood it would take a lot of hard work throughout the season, however, I knew the players were more than capable of achieving the goal. I am extremely proud of all of the players and we now look ahead to the cup finals we have scheduled in the coming months.”

The academy players not only perform on the field but they also ensure they gain their academic qualifications as they study a variety of courses at Solihull College & University Centre. Many of the players are hoping to go on to university once they complete their course at the College.

Academy Vice-captain, Emily Joyce is one university hopeful as she looks to study at the University of Derby to complete a Strength, Conditioning and Rehabilitation course. Emily, who has been a part of the academy for the past 2 years, has now helped the squad secure the league title twice in her time at the College. Emily comments “It is a great feeling to retain the title; we had to work extremely hard and it was tough at times. Although the league is small, it is still a hard league to be involved in and we’re proud to be able to say we have won the league.”

“The moment that stands out for me this season was the game away at Reading as we were losing and had to battle hard to come from behind and eventually win the game 3-2. The game was halfway through the season and that’s when I thought ‘we are halfway to winning the league’. The academy is a great opportunity to be able to develop as a player, gain confidence and get game play experience.”

Due to the fantastic link with Birmingham City Ladies FC the College students have the chance to progress from the academy into the first team, which many previous academy players have successfully done.

Emily added “I will hopefully look to progress into the BCLFC first team and train with the squad as much as I can and hopefully gain gameplay in the future.”

The squad now look ahead to 2 cup competitions where they will be facing Bristol away in the semi-final and Gateshead at home in the quarter-final of another competition, both fixtures set for next month.

For more information on the ladies academy please visit www.solihull.ac.uk or call 0121 678 7000. 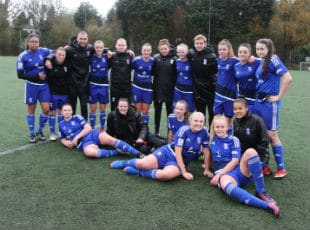