Tom had been nominated for the CIBSE West Midlands Education Award by Rosa Wells, Programme Manager for Engineering and Higher Education at Solihull College & University Centre before being shortlisted with 2 other candidates. Tom, who studied a HNC in Electrical and Electronic Engineering, achieved Distinctions in all units throughout the duration of his course at Solihull College & University Centre and graduated last year. At his graduation ceremony in October Tom was crowned a Special Award Winner to recognise his efforts and outstanding achievements throughout his time at the College.

On the evening Tom was successful in obtaining the West Midlands Education Award and all those involved were thrilled to hear the result.

CIBSE awarded Tom with the honour not only because of his academic achievements but also in recognition of the time he volunteered to support the College and share his enthusiasm for engineering and apprenticeships with young students across the West Midlands seeking to improve the diversity of the workforce. CIBSE West Midland’s Education Officer Lionel James commented:

“The calibre of each of this year’s candidates for the CIBSE West Midlands Education Award 2014/2015 was extremely high. However, Thomas Lusty’s desire for learning and his willingness to assist and encourage others in their learning/development for future success, made him stand out above the rest. Very well done Thomas.”

Tom’s ambition to succeed was clear from the beginning as he showed his natural talent for engineering and was able to study alongside his role at engineering firm Couch Perry Wilkes. Tom has now worked for Couch Perry Wilkes for almost 3 years working on many projects and is progressing well. Peter Tsui, Director at Couch Perry & Wilkes commented:

“Tom is an enthusiastic, self-motivated individual with strong drive and ambition. He is always willing to help, I am very pleased with his work ethic and commitment at Couch Perry & Wilkes as well as his educational achievements to date.”

Tom received a prize for his achievements which included a ticket to the CIBSE Technical Symposium held in Edinburgh this April. Tom commented “Many academic papers and case studies will be discussed in all fields of building services. Discussions of the latest technologies and ideas could give inspiration for designs on future projects. Once the symposium has finished I will have to present this to the CIBSE West Midlands region AGM.”

Supported by Couch Perry Wilkes, Tom is now studying towards his degree at Coventry University and is also very busy with his other passion of canoeing. Tom has represented Great Britain recently in the International Canoe Federation Spring World Cup and competes regularly with his sights set on the Rio Olympics next year.

For more information on the courses available including Electrical Engineering please visit the courses page or call 0121 678 7000. 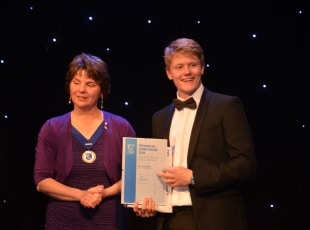