Solihull College & University Centre was invited to exhibit at the recent Conservative Party Conference which was held at the ICC in Birmingham between 2nd-5th October.

The Conservative Party Conference is an annual event held in cities around the UK and this year was Theresa May’s first conference as Prime Minister. The event is a chance for Conservative members, the press and the public to learn about the party’s ideas and policies for the year ahead and with apprenticeships being a key part of the Conservative’s plan it was a great opportunity for Solihull College & University Centre to showcase what they have to offer.

The College was represented by their apprenticeship team headed up by Director of Employment and Skills, Shaun Hindle as well as the College’s close employer partners.

Shaun commented “It was a great opportunity for us as a College to be present at the Conservative Conference and to be able to share the apprenticeship programmes we offer with key businesspeople and politicians in the region.

“With the high apprenticeship targets set by the government it is vital that educational institutions, such as Solihull College & University Centre, play their part in providing a range of options for young people, allowing them to gain their qualification to progress into their chosen industry.”

The ICC welcomed 11, 000 attendees for the conference and the College’s Shaun Hindle was able to meet Iain Duncan Smith, Sajid Javid and Michael Fallon amongst others to discuss the College and the apprenticeship programmes on offer.

Iain Duncan Smith also spoke with Solihull College & University Centre engineering apprentice, Dominik McCormick who recently became the youngest person to be awarded technician status at just 18 years of age by the Institute of Civil Engineers. Dominik spoke with Iain Duncan Smith about his engineering work which was on display for visitors to see.

The College was also able to demonstrate its latest investment in virtual reality as the VR headsets were available for visitors to try. Solihull College & University Centre will soon be offering a variety of courses specialising in this industry and current students are starting to get to grips with the new equipment.

The event was rounded off by a speech from PM Theresa May who addressed party members, exhibitors and members of the public about the future of Britain and the aims of the government for the year ahead.

For more information on the opportunities available at Solihull College & University Centre visit the courses page  or call 0121 678 7000. 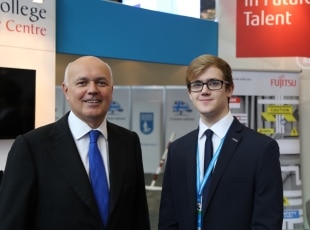