The Skills Show is the nation’s largest skills, apprenticeship and careers event, giving students the chance to find out more about certain industries. Solihull College & University Centre was able to showcase their brand new state-of-the-art virtual reality equipment as they combined art and technology as well as their fantastic aerospace engineering facilities.

The equipment is readily available to students studying at the College including those studying towards their HND in Creative Media Production (Computer Games Design). Students have already been busy creating their own virtual reality scenes and they can even walk around a virtual reality version of their new games lab back at the Blossomfield Campus in Solihull.

“The investment by the College is fantastic and we’ve already had comments by students and partner institutions that it rivals many facilities at even some of the top universities. By responding quickly to market changes our students can experience working with and developing for some of the very latest technologies. With VR being so new, the transferrable skills they are learning across the course and the experiences they create will give them a valuable head start in a soon to be exploding marketplace.”

The College also had chance to tell students about their aerospace engineering facilities at their Woodlands Campus in Smith’s Wood by bringing a little of what they can expect from the course to the NEC for the exhibition. Students were able to take their turn at being a pilot for the day by using the College’s aircraft simulator. The College has recently invested heavily in its aerospace engineering facilities that now homes a Bae Jetstream T Mk2 aircraft as well as the ALF502 Turbo-Fan Engines and other industry grade tools and test equipment. The College also has two flight simulators, one of which is a replica from a Boeing 737-800 NG aircraft.

Aerospace Lecturer at the College, Salman Javed comments: “The simulator, together with the aircraft, the Turbo-Fan Engines and other latest industry grade tools and test equipment, the College’s students can learn in one of the country’s best Aerospace facilities. These resources reinforce the learning and understanding that takes place in the classroom. They provide our students with practical experience which will make them stand out when they approach the industry”.

Prospective students will have the chance to see both facilities and equipment at the College’s open day on Saturday 26th November, 10am-2pm at both their Blossomfield and Woodlands Campus. 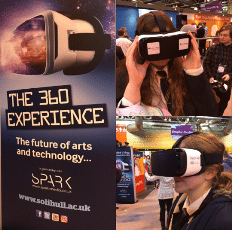