Solihull College & University Centre staff found themselves assisting a family in desperate need. Staff joined other local volunteers on the set of a DIY SOS house renovation in West Bromwich back in July. The episode will be airing on BBC 1 on Wednesday 14th March.

Crystal Chambers, a young mother from West Bromwich tragically died in 2015 aged just 32 of terminal cancer, leaving her young children in the care of her mother Sandra. Sandra spent her life working in the care industry but found her home ill-equipped to house and care for her own family, which now included both of her grandchildren and Sandra’s own son. The DIY SOS team came to the rescue building an extension to accommodate the family.

College staff Carl Pedley, Luke Turner, Claudine Barnes and Andrew Balderson attended, working on the garden and assisting with landscaping. The tutors from all different subject areas ranging from animal care to sport joined in with up to 300 local volunteers.

‘It was quite surreal’ says Carl, who has assisted on another DIY SOS project in the past, ‘it’s so wonderful to see everyone come together, such a vast variety of trades, all giving up their working days to help the vulnerable in the community’.

Claudine added ‘I was invited to join the DIY SOS team for a few days. We were based in the garden and we helped initially with clearing, then with painting fences, laying hardcore and unloading two lorry loads of tarmac!  The whole experience was fantastic. Even the neighbours were offering their driveways for parking machinery or storing tools.  It was one of those events that restores your faith in society.’

Andrew Balderson stated ‘I was more than happy to offer my manual labour skills to a great cause. Helping a family who had been through a traumatic experience’.

Nick Knowles, DIY SOS’s presenter told the press “This family are the best of the Midlands, just the most incredible people and absolutely deserve our help’.

The build was finished in a staggering 9 days in which the house was almost entirely rebuilt.

The programme will air on Wednesday 14th March at 8.00 pm where viewers can hear all about Crystal’s story and the build the tutors assisted on. 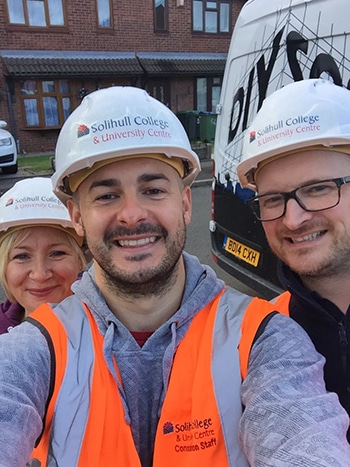