Tuesday 18th October saw a number of staff and students at Solihull College & University Centre overcome their fear of heights all in the name of charity.

Throughout the day the brave fundraisers took it in turns to put on a harness and helmet and make their way up to the top of the 3 story computing centre, before moving closer to the edge to abseil their way down the building.

To sign up to the event, participants were tasked with raising a minimum of £50 in sponsorship to be donated to Mad Hatter’s Children Charity. The charity works with children with special educational needs and disabilities across the Midlands, putting on activities and events throughout the year to bring smiles to the faces of children.

The College’s student enrichment team worked closely with Mad Hatter’s Children Charity to organise the event which also included a Mad Hatter’s themed afternoon tea party where staff and students at the College made donations in exchange for cakes and other sweet treats.

Mayor of Solihull, Councillor Mike Robinson showed his support on the day as he attended the College to meet with students and it wasn’t long before he was persuaded to join in the fun himself and take part in the abseil. The Mayor commented that he really enjoyed the day and the abseil would be something he would remember for the rest of his life.

Chairman of the Mad Hatters Charity, Stephen Goldstein also showed his support throughout the day, commenting:

“We were overwhelmed with the support that we received from the college for this event, the students and staff were so willing to give up their time to take part in what was a brilliant day, dressing up in costume and putting on a Mad Hatter’s Tea Party, as well of course as the abseiling! A great day was had by all, for the benefit of the children that Mad Hatters supports.”

Performing Arts student Olivia Shread was instrumental in the fundraising as she volunteered to dress as the Queen of Hearts for the day to raise awareness of the event, before overcoming her fear of heights and abseiling. Olivia, along with many of her peers, collected donations prior to the event as well as on the day and so far the total has reached a massive £600 with many more donations and sponsorship money yet to be counted!

A great day was had by all involved in the event and the College hopes to continue raising money for the charity in the near future. 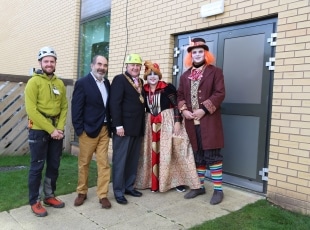