Tiffany has been skating since she was 9 years old and despite admitting to not being a born natural, has worked extremely hard to hone her skills and become one of the best in her sport. Her hard work clearly paid off as she represented Great Britain in 2012 at an international event, competing against the best skaters in Europe and has remained on the GB team since. Tiffany has also competed in the World Championships in 2013 and the European Championships in 2014 where she achieved her first individual British record in the marathon event. Tiffany also holds the records for the indoor and outdoor relays as well as the 100m road, achieving a time of just 12.4 seconds.

As well as being a successful skater, Tiffany coaches the sport in local primary schools as well as at her club, Birmingham Wheels, when other coaches aren’t present. Tiffany has received a youth volunteer award as a result of her volunteer work as she inspires the younger generation to follow in her skates to becoming a successful athlete.

Tiffany has now studied at the College for the past 4 years, choosing to study towards her degree at the College as she wanted to stay local to home and knew that with the smaller class sizes at the College she would receive more support than at a larger university. Tiffany commented “Both staff and students at the College have always been extremely supportive and friendly. Studying Sport & Exercise Science has helped my skating career dramatically. It has provided me with the knowledge regarding nutrition and performance, which has enabled me to develop training plans tailored to my requirements alongside altering my diet. In addition anatomy and physiology modules have provided me with knowledge regarding the energy systems which are used in long and short distances.”

However, studying and being an athlete doesn’t come easy. Hard work and determination is one thing but in order to fund her sporting career Tiffany works part-time to pay for her fees, trips and travel costs. In order to ensure that Tiffany continues with her successful sporting career, Solihull College & University Centre has agreed to sponsor her to ensure she achieves her aims in her upcoming competitions including 3 marathons: the London Inline Marathon; the Berlin Inline Skating Marathon; and the British Championships Marathon. Tiffany has the British Championships in July 2017 in her sights and has set herself targets for this event.

Tiffany hopes to become the British Champion in track championships and also to retain her title as British champion and record holder for the full marathon. Tiffany is aiming for a top 10 place at internationals and hopes to one day see her sport in the Olympics.

Aside from her skating career Tiffany is planning to complete the top-up degree in Applied Sport Science at Solihull College & University Centre with the aim of becoming a sports coach and analyst. 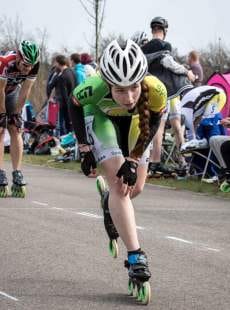