Umar entered into a national competition in the hope of winning the opportunity to have an intensive experience working with a digital effects and games studio in London’s Shepherd’s Bush for one week.

The competition which is hosted in partnership with Pearson College allowed the winners to experience a crash course in digital effects and gaming which they can take forward into their future careers.

Umar used an android app which he designed as part of his Creative Media Production (Computer Game Design) HND, as part of his application to the competition which the organisers were very impressed with and as a result offered Umar a place on the week-long placement as one of the winners.

Umar commented: “My course definitely helped me with the competition as without the course I most likely wouldn’t have made my Android App which won me a place on the project. The course also gave me the knowledge of how to make games which I wouldn’t have had if I had not done the course.”

Whilst in the studio in London Umar was able to work with other young people in design and animation workshops and was given the task to produce an advert for ‘Popchips’. Umar and his group impressed with their design that there is potential for Popchips to incorporate their work into their promotional advertising in the future.

Umar added to his existing knowledge whilst at the design studio and is now looking to complete the latter part of his HND before moving into employment within the field. 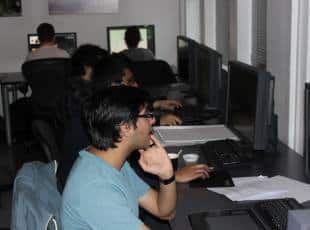