Corporal returns for next generation

Corporal returns for next generation

Presenting to the group he was invited as part of the Skills Academy as a guest speaker. ‘It’s an honour and a privilege to return here. I am from Alum Rock, a challenging inner city area in Birmingham and my course and subsequent career allowed me a change in culture’ Sohail states.

His experience with the course prepared the way for his armed forces career. ‘It was the best 2 years ever, adventure training and PT’ he says of his course, ‘Requirements such as uniform checks and time management have resulted in a great career built on structure. I also held down a job in a local shopping centre while managing my studies’. After his 2nd year Sohail became torn on which route he wanted to take. He considered becoming a paramedic alongside his desire to join the army.  He passed various fitness tests and then received a pass date for the army; at the same time he received an invitation to study paramedic science at university!

Considering both options he decided to follow the Army path and hasn’t looked back since. He trained at an army regiment for 14 weeks of fitness and weapon handling before carrying out 15 weeks of HR and was then posted to an infantry battalion in Salisbury. For the following 2 years he spent time overseas and in the UK. He volunteered for boxing training, went to Canada carrying out administration and infantry duties, then later he worked with the Marines and Canadian forces training together out in Canada.

Later in his career he went to a focus group on how it was to be a young man in the army and after providing feedback he asked if there was a job going in the department. His proactivity paid off as he later received a call offering him a job. He now works for a 3 star general as his 2nd PA. Sohail is currently based in Aldershot in Hampshire working on policy documentation, recruitment, training and development.

Sohail who is from a Pakistani-Muslim, conservative background fought to ensure his loved ones knew that the bulk of work in the army was humanitarian based and not necessarily combat related as often pre-conceived. Sohail’s future looks bright. He hopes to be an instructor at Phase 1 training or he’d like to potentially work for an embassy overseas, the current aim is Washington DC. 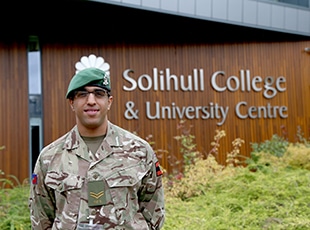