Solihull College & University Centre student Blyth Fox and her dog Roo have triumphed in an agility contest at Crufts.

Blyth competed at Crufts previously with another of her dogs in the Young Kennel Club ring. This time she triumphed in the main ring. Blyth had always wanted to train a dog for events, but a large amount of discipline and training was involved to get the duo ready for Crufts.

Blyth began training at Fox Agility Dog Training Club in Hinckley with trainer Selena Bray and in Coventry at Agility Slice with trainer Jo Gleed. Blyth started training Roo from 10 months old and by 18 months he was fully trained.

Crufts took place at the NEC in Birmingham. ‘I was so excited, I’ve always wanted to go to Crufts’ says Blyth. She was given a paper version of the course before the heat so she knew what they’d be attempting on the course. ‘When you’re there you are running on autopilot’ she states ‘you just focus on your dog and the training, but when you finish it’s impossible to describe that feeling, adrenaline, relief, all sorts’.

Blyth and Roo won the jumping heat in the morning and the agility heat in the afternoon which meant they won the overall category. The scores were revealed on the large arena board ‘I looked up afterwards and saw rank 1’ Blyth states with disbelief. Judges presented Blyth with 3 trophies, 2 for the heats and a large one for winning overall. ‘Now I am focussing on Championship classes where you can enter top competitions for your country’ says Blyth.

Blyth’s experience on The Agility course has helped her with her own studies. She is now using her experiences to assist her on her coursework. She is looking at carrying out a project on health testing in cocker spaniels. Blyth trains twice a week, studies a full time course and also works part time at a groomers in Coventry. It leaves her little free time. Her supportive parents drive her around the country so she and Roo can compete.

Hoping to continue on to study her BSc Top Up Degree at the college next year. Blyth would like to go on to work with detection dogs on drug searches.

Roo for his part is a happy dog, with a great temperament. 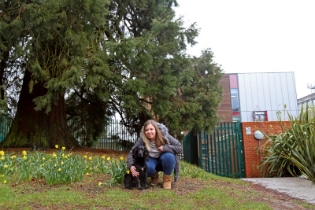