Dayl, who is currently studying towards his Retail qualification at the College jumped at the chance to volunteer with the Hospital as they organised a number of pop-up shops over the Christmas period to sell gifts and allow children to visit Santa’s Grotto. Dayl was based in Birmingham’s House of Fraser store throughout his volunteering and made the 40 minute commute from his home many times throughout each week.

Dayl commented “I’ve always wanted to work in retail but have also had experience working with young people so I was able to use both qualities within the work experience.”

Often going out of his way to do what was needed for the charity, Dayl worked extra shifts and filled in where possible, commenting “I enjoyed it from the beginning. Volunteering was fun and enjoyable and I was able to promote a great cause using the skills I have learnt at College, such as conversation starters, open and closed questions as well as the correct way to approach customers. Some people may think because I have autism I would be nervous, but I loved it straight away.”

It was clear to see that Dayl had enjoyed his work experience and he impressed those at Birmingham Children’s Hospital. Regional Fundraising Officer, Ryan Stanley commented “Dayl has been great at the House of Fraser grotto, his attitude has been fantastic and he has really got stuck in every day he has volunteered. A number of different staff members have worked with him and every single one of them have come back to me and said how great he has been to work with, we even had a couple of customers get in touch and let us know how great he has been with the children.”

Dayl will now be volunteering for Birmingham Children’s Hospital on a regular basis with upcoming events in 2017. He also hopes to progress with his qualification at Solihull College & University Centre and gain employment in retail upon completion of his qualification. 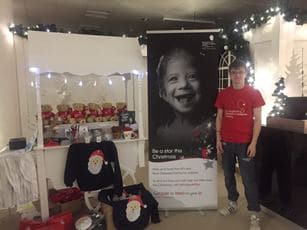