Solihull College’s Jade Moore and Jo Potter have become names that many around the country now know. Both ladies, who play for Birmingham City Ladies, jetted off to Canada ready for their first game against France back in June. The competition gained more coverage than usual and viewing figures, even for the games that kicked off at midnight, were very high as the England Ladies battled their way through the competition.

Jade played a vital part in the competition as after the first game defeat to France she started every game and played the full 90 minutes. Jo also made her appearance to add to the efforts as she aided with the victory over Colombia in the group stages which earned the England Ladies with a place in the second stage of the competition, onto the quarter finals and finally the semi-finals.

Despite the efforts from the England Ladies including Jade, in the semi-final against Japan, who were current cup holders, the ladies found themselves defeated after an unfortunate own goal just moments before full-time.

The ladies, including Jo Potter and Jade Moore reached their first ever World Cup semi-final and progressed further than any England team in 25 years as they are the 3rd ever England team to reach this stage of the World Cup. The ladies have made everyone take note of the success of Women’s Football as they went on to beat Germany 1-0 to secure their 3rd place and bronze medal.

Jo Potter, who coaches the ladies football academy at Solihull College and Jade Moore who is the physio for the ladies academy at the College, have already returned to playing in the Women’s Superleague, both playing for Birmingham City Ladies. Both ladies will be returning to the College in September to work with the Football Academy. Both Jo and Jade have previously helped the Solihull College ladies academy secure victory to become double English Colleges FA Cup Champions and are a great inspiration for all sportspeople, both men and women, who are looking to progress with their sporting career.

For more information on the football academy at Solihull College please call 0121 678 7000. 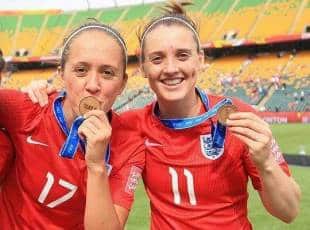