Solihull College & University Centre has added another first-class honour to its tally this year. This brings the number of first-class honours results to a record-breaking 20 with the inclusion of this year’s student graduation speaker Jemma Kinzett.

Jemma’s First Class Honours result follows a string of college successes for the 21-year-old. At last year’s Expresso 90 festival, BA Creative Film Production student Jemma took home the trophy for her short ‘Patient Zero’ an experimental piece about a patient on a ward who has no idea how they got there.

Jemma has gone on to involve herself in multiple creative projects as a result. “After I won the award it really opened doors for me” Jemma offers, “I talked to a director Gary who was on the judging panel. Since then I worked as a runner on his new feature film.” She submitted ‘Patient Zero’ to other festivals and was delighted to receive a place in the finalist list for ‘Best Young Filmmaker of 2018’ at Out of the Can film festival.

Jemma’s industry success led her to create a podcast for media students looking to work in the industry. The ‘Monday Media Podcast’ is an honest and unique look at life in the industry. Available on iTunes, the podcast is recorded monthly and features interviews with scriptwriters, directors and videographers.

Jemma started at the college in 2014 and completed the Level 3 Extended Diploma in Creative Media Production, the HND in Moving Image and then the BA (Hons) Creative Film Production Degree, studying at the college for 5 years.

“My college tutors were amazing,” Jemma admits, “I suffer from anxiety and they were so supportive to me whilst also giving us so much creative freedom. I cannot thank my tutors enough for all the support they have given me over the past five years. They always believed in me and my work and helped shaped the person I am today.”

Jemma’s First Class Honours result is a testament to her perseverance; “the result is overwhelming” she admits; “it feels so wonderful to see everything complete, it’s amazing I’m really at a loss for words.” 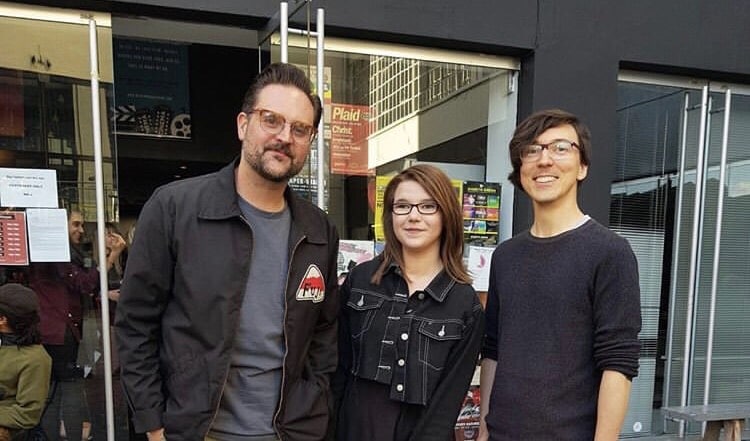 Jemma with tutors Dan and Matt.