Former Solihull College student Darren Gumbs is preparing for his move to America after being granted with a O-1 visa for individuals with extraordinary ability. Darren has been competing as a professional body builder since he was 17 years old and was regularly competing when he attended Solihull College back in 2005.

Darren studied Sports Therapy, Massage and Personal Training at Solihull College and believes it was a good opportunity for him to progress as the College supported his bodybuilding efforts by featuring his success in the College prospectus.

Darren will be making his move to America in hope of adding to his 26 fitness titles which already include a World Champion title. Darren is also looking to follow another life-long aspiration by attending acting school in Los Angeles. He has been accepted into TVI Actors Studio, to study part time, which is the largest acting school in America and has previously had stars such as Eva Longoria studying at the school.

After finishing his qualifications at Solihull College Darren, who is originally from the Caribbean, represented the UK in World Championships and also competed in the USA in Los Angeles. Darren spent 6 months in the US building his portfolio, including meeting Arnold Schwarzenegger, someone who Darren is keen to follow in the footsteps of.

As well as competing in competitions Darren uses his qualifications from Solihull College in personal training to work with clients to train for marathons, including the New York and Paris marathons. Darren hopes to continue working with clients after he makes his move to America and would like to eventually work with sports teams as well as running his own fitness classes. Darren explained how studying at Solihull College allowed him to gain the experience and qualifications needed for the fitness industry. “Solihull College has really good facilities, especially when for studying nutrition. The teaching at the College was really helpful and I always felt welcome and a part of Solihull College.”

Darren explains that the visa he has been granted has previously seen stars such as David Beckham make their move from the UK to America to develop within their careers, something which he hopes he can emulate. Darren will be competing in the Arnold Schwarzenegger competition early next year and explains “I want to encourage young people to stay focused and pursue their dreams. I want to give back to the community for the support that I have received.”

For more information on the sports courses available at Solihull College visit www.solihull.ac.uk or call 0121 678 7000. 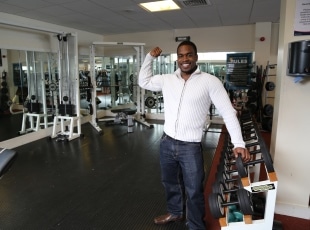