Not only did Jess become the youngest ever Champions League player at just 16 years of age when she made her debut for Birmingham City Ladies, but she has now been named as the Professional Football Association (PFA) Young Player of the Year.

Jess was part of the Birmingham City Ladies Football Academy at Solihull College & University Centre for two years as she trained hard to progress through the ranks whilst completing her studies. Whilst at the College Jess made her way into the England U19 squad, featuring regularly and even getting her name on the score sheet on her debut.

After completing her studies at the College, Jess continued to shine on the football pitch, playing regularly for Birmingham City Ladies as well as England U19’s and has clearly impressed all of those around her as England Women’s Coach, Mark Sampson included her in his squad this April.

Because of all of Jess’s achievements at just 19 years old, she made her way on to the shortlist for the PFA Young Player of the Year. The PFA awards were held in London on 23rd April and Jess was announced as the winner of her category.

Jess commented “The fact it has been nominated by players that you play against day in and day out makes it a massive honour for me. It could have gone to any one of the girls that have been nominated, because I think they’re all exceptional. It’s a massive, massive privilege to collect this award. I don’t set any goals. My main focus is just playing for Birmingham because they’re my club and I want to perform for them week in and week out. Anything that comes with that is just a massive privilege.”

Jess was in great company with other award winners including Kelly Smith, Lucy Bronze, Dele Alli, N’Golo Kante and David Beckham, showing just what her future has in store for her. Phil Trilloe, Head of School for Sport at the College congratulated Jess, stating it was a great achievement and is only the start for Jess, the College is very proud.

After enjoying the celebrations of winning the PFA award Jess will be focusing on what’s ahead with Birmingham City Ladies playing in the FA Cup Final against Manchester City Women on 13th May at Wembley Stadium and will be working hard to secure her Senior England debut in the future.

Solihull College & University Centre will be holding trials for their Ladies Football Academy in partnership with Birmingham City Ladies FC, to help the next generation of Jess Carters progress their sporting careers. The trials will be held on Tuesday 16th May, 3:30pm-4:40pm at the Blossomfield Campus in Solihull. 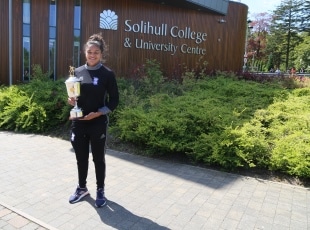