Former Solihull College & University Centre student Paige Aitken is currently competing in this year’s Miss Birmingham competition and is aiming to raise money for disadvantaged children around the world by recently completing a full marathon on roller skates.

Paige, who attended Solihull College from 2012 to 2015 studying sports and exercise science as well as cabin crew, is fundraising for ‘Beauty with a purpose’ who are a charity that work globally to support disadvantaged children with a variety of needs. She completed the 26 miles on Sunday 6th March in a great time of 2 hours 9 minutes. Paige will now be holding a fundraising day to add to the money she has already raised which currently stands at over £200.

Paige entered the Miss Birmingham competition in 2015 and finished in the top 12 and was also crowned Miss Eco. However, this year Paige is determined to increase her finishing position and explains she is determined to improve on her position as well as raising a big total for the charity. She comments “I want to show people that you can do anything you put your mind to. I want to be able to work with people to improve their lives. The competition isn’t all about beauty and looks, there’s a lot more to it with fundraising being one of those things.”

Already volunteering with the Brownies and Children’s Cancer Trust Paige wants to widen her fundraising and volunteering net by working within the local community in Birmingham.

The competition consists of a number of rounds including fundraising, sports, social media and testing the finalists creativity by making outfits from recycled materials and Paige is one of the 40 finalists selected from the 850 applicants. The final will be on 20th March and after competing Paige will begin her job working for Thomson as a member of cabin crew, which she says is part of her career plan after she completed her studies at Solihull College.

Paige hopes to continue with her cabin crew career and after visiting British Airways as part of her studies at the College hopes to one day work for the UK’s largest airline. 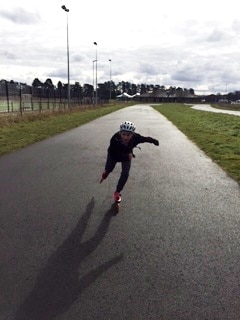