Two students from Solihull College & University Centre have taken on a design project in partnership with international support service and construction company, Interserve.

Will Bennett and James McFerran studied at the College to complete their HND in Graphic Design before this year progressing on to the BA (Hons) in Creative Arts and Design Practice which is run at Solihull College & University Centre in partnership with Oxford Brookes University.

When completing the second year of their HND Will and James, along with other students at the College, were given a live project to design the hoardings for Interserve which would be fitted around the site of Interserve’s new regional headquarters near Birmingham Airport.

Interserve is combining its offices in West Bromwich, Dudley, Erdington, Redditch and Aldridge and moving to a large modern office near the airport. The building is set to be completed by early 2018 and the move signals the company’s continued confidence in the region. Interserve wanted to ensure that its staff and those around the new site felt positive about the move and wanted this message to be portrayed on the hoardings.

This is where the students at Solihull College & University Centre were asked to help. The hoardings that would be fitted around the construction site of Interserve’s new offices needed to have a clear message outlining Interserve’s vision to redefine the future for people and places and the company’s values: everyone has a voice; take pride in what you do; bring better to life; and do the right thing.

With this in mind the students at the College set off to produce some designs, working in groups, which they then pitched to representatives from Interserve. Two designs were then chosen and students then had to develop their initial designs further before visiting the Interserve offices to pitch again to directors of the company.

Student Will Bennett commented “We aimed to capture the values and overall ethos of Interserve’s SustainAbilities plan with our designs and, from the feedback we’ve received, we managed to do exactly that.”

Although Interserve was impressed by both groups work, Will Bennett and James McFerran’s designs stood out to them. Will and James then worked with Interserve as the hoardings were produced to display around the construction site.

James McFerran said “It’s a great opportunity for us to see our work in a commercial context and working with a company as big as Interserve has been a really valuable experience.”

“The winning designs reflect Interserve’s values, culture and our desire to create a modern, sustainable and inspirational new environment for our people. We would like to thank Will and James for their hard work and look forward to welcoming them to Ingenuity House when it is complete in 2018.”

The hoardings will be on display until Interserve’s new regional headquarters is ready to be opened in two years time. 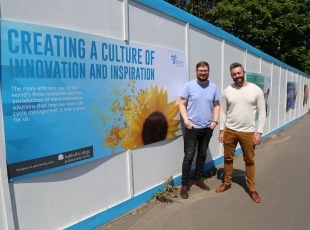