Vanessa previously worked in schools as a teaching assistant and regularly worked with children with special educational needs. Art and design was simply a hobby for Vanessa but she wanted to take her creativeness further and decided to have a career change and do something for herself and be independent. Vanessa stated that “with a family to look after it wasn’t an easy decision and it was going to be a challenge but a good challenge.”

After researching into online courses Vanessa felt that she wouldn’t get exactly what she wanted from an online course. Vanessa turned to Solihull College and enquired about the courses on offer, she felt the courses at the College offered structure, support and the chance to take her creativity further like she had hoped for.

Vanessa started her Access to HE course and even though, she admits it stretched her, the course allowed her to go in directions that she didn’t think she would. Vanessa has excelled within her course and impressed her tutors. Ziggy Tashi, Access Graphic Design Programme Co-ordinator, commented “Vanessa’s immense commitment to her study has been an enormous inspiration to all her colleagues in her group. She succeeded despite considerable obstacles that stood between her, her learning and her desire to eventually become a professional designer. I cannot emphasise enough her immense energy, enthusiasm and the positive outlook and influence that Vanessa bestowed on the group.”

On completing the course Vanessa will be staying at Solihull College to complete a HND in Graphic Design. During the summer break between courses, Vanessa is hoping to be able to showcase her work in galleries. “Through the course I have formed links with other students so we can research into promoting ourselves and our work as well as finding contacts of where we can display our work.”

Vanessa’s future ambitions are to work within a design studio as a professional designer and eventually to own her own graphic design business. Vanessa feels confident in her abilities and commented “I feel that I can succeed and the course has been a stepping stone to a brighter future.” 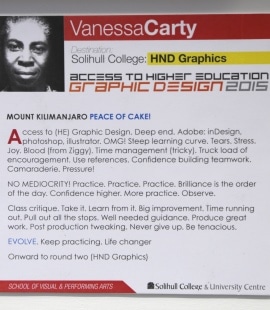