James Layton has been working hard over the past 2 years studying towards his Level 3 Diploma in Health & Social Care at Solihull College & University Centre and now his studies are nearing an end, James has managed to secure his dream job.

From a young age James has wanted to work within the emergency services sector as many of his family members currently work in the Police Force, but it was when James reached secondary school he narrowed down his options and knew that he wanted to pursue a career as a Paramedic.

After leaving school James began his A-Levels at his local 6th form college but soon realised this wasn’t the route he wanted to follow. He then enrolled onto the Health & Social Care course at Solihull College & University Centre and it was from here that his passion to be a Paramedic grew. James was able to take advantage of the work experience opportunities that are available on the course and worked at a Private Ambulance service in Warwickshire and at Spire Parkway in Solihull.

James impressed on his work experience placements, particularly in Warwickshire, as they asked James to continue working for them after his placement had finished. Using his experience from College and his work placements James made the decision to apply for a position in the West Midlands Ambulance Service.

The process involved applying through the NHS jobs website before having to complete exams in Maths, English and the Highway Code. After completing the exams the next task for James was to pass his driving assessment and fitness test; after much dedication and hard work, James passed all of the exams with flying colours.

After applying in November and enduring the assessments in December, James then had an interview in January, where he used his knowledge from college as he was offered a position with West Midlands Ambulance Service just the day after.

James commented “The support from the staff at the College is incredible. The College has helped me to focus on the use of good grammar and language which has essentially helped me in my application for the role. The skills lab and equipment at the College is fantastic; it allows students to practice and have hands on experience of working. I am really looking forward to starting my new job.”

James’ role will be a Student Paramedic as he will be partnered with a colleague who will show him the ropes of working as a Paramedic. Alongside this James will be trained up to become a fully qualified Paramedic Technician and will attend university, which will be partly funded by the Ambulance Service, to gain his qualifications.

James added “This is a great option for me. Rather than simply going to university I will be able to gain a lot more practical experience and be on the road as well as gain my qualifications.”

James is set to start his new position in July, after he completes his college qualification. 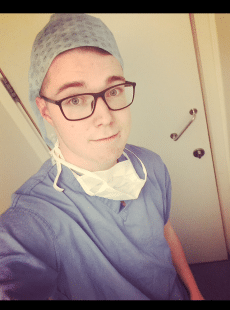