Jess Barry is not only a high flyer when it comes to her education but she’s also the newly crowned FCB Women’s Title Holder.

At the age of 16 Jess decided that she wanted to find an apprenticeship as an electrician, stating that she felt male dominated jobs such as this earned a good wage and there was no reason why she could not do the same. Jess had never felt that university was for her and she set her sights on gaining employment within her chosen field.

After completing her apprenticeship Jess was fortunate enough to gain a job as an electrician before working her way up the career ladder and securing employment with Virgin Active as a Building Services Manager. Shortly after, aged just 22, Jess began to realise that if she wanted to progress within her career she would need further qualifications to do so. Jess commented: “I’ve realised that your experience can only take you to a certain level; I need further qualifications if I want to work towards higher paid jobs.”

Now in her first year of her HNC in Building Services, Jess also works full-time along with her studies at the University of Warwick as an electrician and has recently been offered a promotion to work in Building Management Systems. Upon completing her HNC Jess hopes to do something she never thought would be for her, go to university to gain a full degree.

Jess’s HNC has allowed her to see which aspects of building services she enjoys, resulting in steering her towards design work in mechanics and ventilation.

Not only does Jess have a busy schedule with work and college she plays county football and has recently become an amateur boxer and has hopes of making it to the next Olympic Games. Jess trains every day at 6am before either work or college and has quickly excelled in the sport. After only taking up boxing 18 months ago, Jess has already set her sights high and hopes to defend her FCB title in March.

Jess comments “You have to be motivated. My course can be a lot of work, especially with my sporting commitments, however, it is achievable if you put the effort it.” 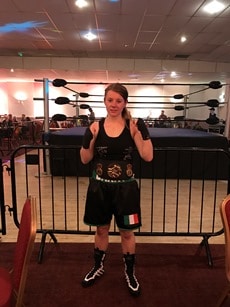