Ladies football academy’s season gets off to flying start

Ladies football academy’s season gets off to flying start

Solihull College & University Centre’s ladies football academy has had an extremely positive start to their 16/17 campaign.

The academy team, which is run in partnership with Birmingham City Ladies FC, are currently undefeated this season in the league and in the cup. Their most recent win was a huge victory of 13-1 in the English Schools FA national girls cup. The ladies team have now reached the last 16 with the hope of progressing to the cup final.

The academy development team at the College has also had a great start to their season as they too remain undefeated as they secured victory over Hartpury 3-2 and a huge win over Hereford 6th Form by winning 7-1.

“I feel the beginning of the season has gone well because with no losses yet, as a team we can only get better.

“I choose to do football at College because I want to improve my performance in football and make friends with similar interests as me. My favourite thing about being in the football academy is having people with a deep knowledge and understanding of the sport to help me develop.”

Another student and academy player Amelia-Jane Longmore-Price decided to choose Solihull College & University Centre as her place of study, despite the fact she would have to travel a lengthy distance to and from the College.

“Coming to the College has provided me with a chance to play high level football alongside some excellent and incredibly friendly players and coaches. Having come to this College for the support given behind female football, I believe the opportunity to play is worth the long distance my journey entails to get to College, as I have to take a bus, shuttle and train. Playing for this team has not only made me more determined to succeed in football but it also inspires me to succeed in my studies, balancing the needs for both well.”

The academy has produced many successful players in recent years with students going on to secure positions in the Birmingham City Ladies first team as well as making their debuts for England senior teams, including Sophie Baggaley most recently. The academy is managed by BCLFC first team manager, David Parker and the College’s Louis Sowe manages the up and coming development squad.

“This is the second year we have run a development women’s team to allow all abilities to attend and have the opportunity of playing competitive football. Last year our Sports Maker, Natalie Wilcox did an excellent job laying the foundations  for the team and this year it has gone from strength to strength and we’ve started the season unbeaten, playing probably two of the most difficult sides in the league.

“I think it’s important for people to recognise that we have a very successful Birmingham City Ladies Academy team but we also have a successful development team that we plan to grow and improve each season. It’s important for any girls that want to experience playing football as well as studying academic courses recognise the opportunities here at Solihull College & University Centre.”

For more information on the courses or the football academy at Solihull College & University Centre visit courses page, call 0121 678 7000 or visit the open day on Saturday 26th November between 10am-2pm. 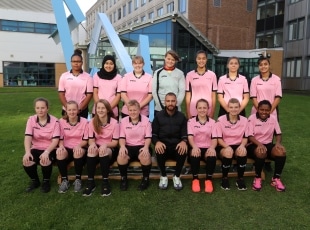