On a solo expedition to run a marathon in every country in the world, endurance runner Nick Butter is currently embarking on the endurance feat to end all endurance feats. ‘Running the World 196’ is Nick’s new expedition with the aim of raising £250,000 for Prostate Cancer UK. The expedition is estimated to take 550 days, taking in 196 countries, spending around 2.5 days per country. Running through war zones, the heat of the Sahara and the extreme cold of Antarctica, Nick has already embarked upon his journey, clocking up numerous countries since his January 6th start date.

‘Working with Solihull College & University Centre was such a great opportunity for all parties’. Nick states ‘First and foremost this expedition is about educating the world about Prostate Cancer. Without the support from these incredibly talented folk I wouldn’t be able to engage with the world as easily. In this day and age we operate on social media and immerse ourselves in endless videos of all sorts of things. The trip covers every country in the world, touches hopefully millions of people along the way, and it’s these videos that get the most attention. Rachel and Samantha have already exceeded my expectations, not only with the quick turnaround but the quality.’

Each week Sam and Rachael have produced 4 new videos highlighting the ups and downs of the trip, the places Nick visits and the people he meets. There is now a seamless collaboration between the 3. Nick knows what shots the students are looking for and films with that in mind. So far the students have created videos of Toronto, Miami, Haiti, The Bahamas, Dominican Republic, and Jamaica. This will be used across all social media and later in Nick’s full length documentary of his venture.

‘The work has been invaluable’ Nick adds ‘great editing, seamless production and it all happens without questions or hesitation. I am honoured to have Rachael and Sam working to support the trip’.

Working with Adobe Premiere, Sam already feels they have a great grounding based on what they’ve already learned on their course. ‘The College has been great. We learn how to use a variety of equipment, so the course has really given us the tools we need to assist with this project’.

‘Both students are at their first level of degree so this level of exposure is amazing’ Tutor Matt Prentice adds.  The students will be assisting for 1 year and Nick plans to be running until July 2019.

If you’d like to track Nick’s progress check out https://www.nickbutter.com/. 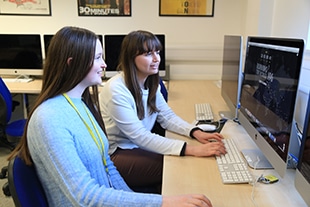