Solihull College Media students were part of the Solihull Jazzfest on Saturday 23 and Sunday 24 May. The festival was organised by Solihull Business Improvement District (BID) who aim to promote Solihull as a great town centre to work, visit and do business.

The Festival offered a weekend of live Jazz music on 2 stages – in Touchwood Shopping Centre and in Mell Square as well as entertainment throughout the town centre. Saxophonist and double MOBO winner YolanDa Brown were amongst the performers.

Students at Solihull College were given the opportunity to photograph and film the 2 day event, including behind-the-scenes footage of the Festival. Programme Manager for Media, Manisha Parmar said “??The opportunity for our HND and 90 Credit Diploma Media students to work with Solihull BID was fantastic. They worked together to create a promotional video which covered the recent Solihull Jazz Festival. This was a perfect opportunity for our learners to work as a film crew and gain valuable experience of working as freelance professionals in industry – something they will be aspiring to do for themselves in a few years.”?

Students studying Creative Media Production, currently in their first year of their course, took on the task of filming the Festival whilst HND Diploma student Gabby Siqueira Do Santos acted as project manager. Gabby commented “??this was the first time that I have had to manage a team of people who I don’t know. I didn’t know each individuals skills when I first met the team but we had to work together to ensure that we achieved what we wanted. The opportunity gave me the chance to develop my mentoring skills and the team listened to me which resulted in a smooth process.”

The students arranged interviews with members of the public as well as the performers at the Jazz festival. The first year Creative Media students; Laura Ray, Danielle Lee, Matt Ellgood and Reece Rooney spoke about their experience of the day. Matt commented “??this was the first time we have had the chance to film a live show as previously we have worked on a documentary where we could do as many takes as necessary, however with live shows you just have one chance to capture the shot.”

The students not only had to adapt to the live filming but also had new equipment to get to grips with, which they managed to do successfully. The students captured various locations of the parade and lots of performers as well as the speech given by the Lord Mayor.

Solihull BID Director Melanie Palmer spoke about the students work: “??It has been fantastic to work with the Solihull College Media students recently at our Jazz festival. The whole group were highly motivated and acted throughout the event in a professional and engaging way; we are looking forward to seeing the first results and to forging a long term relationship moving forward. Well done Solihull College! What a great example of providing young people with a focused training springboard into their future careers.”

The students are now collating the footage to make a video as well as looking for new opportunities over the summer period. The team will then go on to complete their second year of the Creative Media Production course which will start in September.

For information on the Media courses available visit www.solihull.ac.uk/courses. 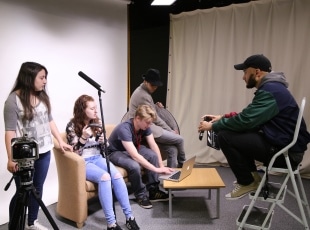