Lewis Clements, Alex Manners, Danielle Lee and Laura Ray, who are all studying Creative Media Production, will be filming and editing the club’s football matches for BT Sport.

As part of their work experience the students travelled to London for two days and had the chance to be trained by Professionals at BT Sports on how to correctly shoot and edit the highlights for a Sunday broadcast on ‘The National League Highlights’. Lewis, Alex, Danielle and Laura took their positions in the stands to cover the footage of a pre-season friendly game between National League club Dagenham & Redbridge and League two side Leyton Orient. The team of media students had to ensure they captured every vital movement in the 3 goal game. The students used the skills they have learnt whilst studying at the College along with the tips given by BT Sport to get the necessary footage needed for the highlights show.

The students have now been given the responsibility of continuing their work experience with BT Sport by filming the games of local club, Solihull Moors. Moors ended their season with a promotion and therefore with the new season looming, will be playing in the National League.

The 4 media students will now be in charge of filming the Solihull Moors home games throughout the season and putting together the highlights in time for the highlights show each Sunday.

Lewis Clements, from Solihull, says “This is such a great opportunity to be involved with my local team and such a highly reputable company such a BT Sport, I did have to pinch myself whilst walking through BT Studios.”

Programme Manager for Media at Solihull College & University Centre, Manisha Parmar added “This is a tremendous opportunity for the Media students to shoot and edit live Matches ready for broadcast.”

For more information on the courses available at Solihull College & University Centre visit www.solihull.ac.uk or call 0121 678 7000. 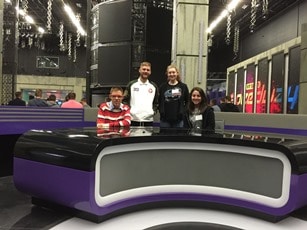