Solihull College & University Centre’s Football Academy gives students the chance to study and follow their passion for the game at the same time.

The academy is run for both male and female players in partnership with Solihull Moors and Birmingham City Ladies. It allows students to gain their qualifications as well as train and play competitively on a regular basis. The academy is run by experienced coaching staff who endeavour to hone the talents and skills of participants, with an aim to get students fit, active and enjoying sport, as well as maintaining a competitive edge. Students studying any course across the College are encouraged to take part in the academy.

The men’s academy began in partnership with Solihull Moors in 1998 where 20 keen footballers enrolled whilst studying at the College. As well as studying towards their College qualification, the students worked towards their FA Coaching badges and gained work experience in schools. Many of these students now work full-time in sport or in schools and many went on to play professionally including Aaron Brown at Reading FC.

From then the College’s men’s academy has developed further producing even more successes including Solihull Moor’s first team captain Theo Streete and Wigan’s Will Grigg, both of whom attended the College and played as part of the academy.
This season the College plans to push the academy even further. Solihull Moors have recently been promoted to their highest level ever in English football. Academy Manager, Mark Fogarty comments: “This is a great opportunity for players to come and develop their game alongside their education. With Solihull Moors playing at their highest ever level and the strongest backroom team we’ve ever had, this is the perfect time for players at the academy to make their mark and really push for an opportunity in the first team”.

Solihull College & University Centre now has 3 teams including the reserves that are all U19 and playing in the Midland Division 3, which is an open age league. The team has started well this season, securing 4 wins out of 5.

The academy is already looking successful this year with 3 players currently on trial at clubs; Tyrese Shade and James Metford at Huddersfield and Kieran Dawes at Birmingham City. As well as this, academy player Marshall Willock has already been to Birmingham City and Josh Parsons is about to go to Coventry City. Many of the players have also shown great potential to progress into the first team at Solihull Moors, including Romario Martin who is already making his mark in the first team squad.

The academy continues to grow and produce sportsmen who will no doubt be extremely successful in the professional game. 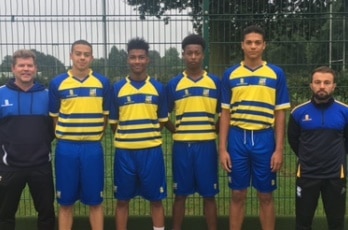