Optima Hair Specialists – a hair replacement company in Edgbaston, Birmingham – have become the biggest hair specialist in the UK, and Solihull College & University Centre student Cassie Gaunt is now part of their hard working team. Cassie studied towards a level two qualification in hairdressing before deciding to further enrol on a level three course; on top of this she had the difficulty of finding employment, and worried this would be a challenge as she had to fit this around being a mature student and a mother. However, the worry did not last long and she was lucky enough to be offered an interview at Optima.

The 13 year old business, run by Managing Director Pete Murtha who believes “if you give good, you get good”, will allow Cassie to undergo six months of training from experienced staff to ensure she has all of the correct skills to complete each job successfully. Now sharing the knowledge both Pete and Cassie have gained, they spoke to hairdressing students at Solihull College’s Woodlands Campus, informing them of the opportunities such a job provides; he was keen to talk to any students who felt this particular area of work would suit them, and emphasised that everybody who works for him are treated as equals: “I believe in giving people a chance, we are all in it together and nobody is better than anybody else”.

In fact, this is an area Cassie particularly enjoys about her role at Optima. She describes the ability to see each co-worker as equals as “appreciation within the company”, and it was evident to see her bubbly personality and friendly aura would fit perfectly into the company.

Pete (winner of Birmingham’s Businessman of the year in 2015) also takes the time to visit Birmingham Children’s Hospital amidst his work, expressing that having the ability to help others is “humbling”, to which Cassie agreed. She also later added “I now go to work with a smile on my face; it’s a great place to work” – and with the chance to help somebody suffering with alopecia or cancer it’s no wonder she appreciates and values her new job so much.

Cassie’s hard work during her time at Solihull College and the support she received from tutors and teachers has given her a pathway into the line of work she thoroughly enjoys. It has secured her a job and given her the prospect of taking these skills further afield, as Pete explained in his talk he has plans to expand his business to London, Miami and Los Angeles. Now other students can follow Cassie’s career path by using their hairdressing skills and qualifications to apply to work at Optima. Cassie comments “The course at Solihull College is great for people in the local area. It’s good for the community.”

For more information on courses available at Solihull College & University Centre visit the courses page, call 0121 678 7000 or visit the open day on Tuesday 19th April at the Blossomfield Campus or Wednesday 20th April at the Woodlands Campus. 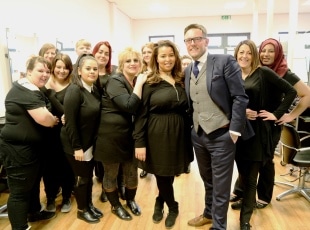