Solihull College & University Centre Performing Arts students recently took part in a College production of ‘We Will Rock You’.

The musical is based on the songs of Queen was put together at the College by Performing Arts and Dance lecturer Sam Franks. The students performed over two packed out days – two matinee performances and two evening performances, the culmination of months of work. Auditions took place in March with 2nd year students in main roles.

The story tells the tale of Galileo and Scaramouch, two young star crossed lovers of music set in a future earth and lends itself beautifully to Mercury’s legendary hits.

Singing, acting and performing, the cast proved across the board talent and offered a great glimpse of the talent the college is producing.

The group are tasting stardom on all different levels of late. They recently attended a ‘Dreamgirls’ workshop in London with one of the play’s cast Ashley Luke Lloyd. This was followed by a matinee showing of ‘Dreamgirls’ at The Savoy. Visiting the world-renowned Pineapple Dance Studios in the morning Ashley taught them a routine which consisted of dance and vocal performing arts.

‘I thoroughly enjoyed teaching the students – it was great to see wonderful energy coming from aspiring performers’ stated Ashley.

Lecturer Sam Franks was similarly impressed with the experience: “The students found the trip really inspiring. To be learning from someone on the morning and performing with them and then to see them up on stage in the West End later, it was very important for the students to see what’s achievable in the arts if they work at it.” 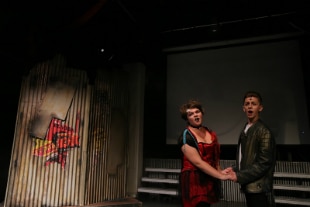