Sean Baker, 21, from Olton, a student of Solihull College & University Centre and a Babcock apprentice is proving a force to be reckoned with in the IT world.

Sean studied a HNC course and a Level 4 NVQ diploma in ICT Professional Competence, as part of his apprenticeship, which he completed a remarkable 8 months early!   In addition, Sean has completed a Level 5 HND in Computing and Systems Development, attaining distinctions across the board.

Achieving a HND in conjunction with a Level 4 NVQ Diploma wasn’t enough of a challenge for Sean and he has recently topped the experience off by winning a college award for ‘Computing Apprentice of the Year’. The award is the latest in an incredible line of achievements for Sean.

Sean’s success has not surprised his IT Assessor Rachel Fisken who worked with him on his Level 4 Apprenticeship , she noticed Sean’s potential and nominated him for the ‘Apprentice of the Year’ award at the student achievement awards 2016-2017.  Rachel commented: ‘Sean has been an exceptional apprentice and it has been a genuine pleasure working with someone with such inspirational drive, commitment and talent’.

Sean states:  ‘I started out doing electrics because I wanted to learn a trade and thought it would be worthwhile to learn but I didn’t enjoy it as much I thought I would so I started looking to get into IT instead. I had little IT skill originally’, he jokes, ‘I could just about log into Windows’. Soon however, through the apprenticeship, Sean found himself excelling in his new field.

An IT apprentice opportunity came up at OCM communications and Sean leapt at the chance. ‘That was extremely helpful to help me learn the basics and complete my level 2 apprenticeship, I also enjoyed doing IT at school for my GCSE’s. I heard about the College offering BTEC courses and decided to look into it, I then did my level 3 apprenticeship onwards at Babcock and the College’.

On his Apprenticeship course Sean states: ‘Rachel was very quick at responding and very supportive and it was really great to get paid to work in a business whilst learning the technical side at College as well’.

Sean is now working at Babcock, a highly-skilled engineering services business, and a significant ambassador of Science, Technology, Engineering and Maths (STEM) careers across the globe.

The future looks bright for Sean who is looking to complete a top up degree and has his sights set on a 1st. With the ambition and skill he’s already shown we have no doubt he’ll achieve it. 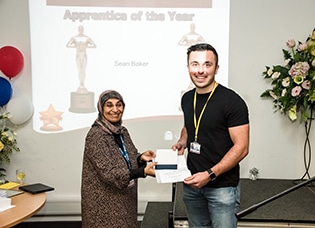