Shaun wins apprentice of the year

Shaun wins apprentice of the year

Shaun Dumigan was recently successful in achieving the title of Apprentice of the Year at the 2015 Solihull Bid Excellence awards ceremony. Shaun, who was described as ‘an outstanding apprentice with a passion and thirst for knowledge’ attended Solihull College & University Centre to complete his apprenticeship in customer service with Solihull Council.

“I feel that my Customer Service apprenticeship gave me all the vital information and experience I needed to be able to fulfil my job. The course also helped me to prepare myself with how to speak to customers in a more professional way.

“Throughout the course at Solihull College, I felt supported all the way. It was explained what would be expected of me whilst on the course and I had support from tutors and assessors if I needed it and nothing was too much hassle for them. Without their support, I wouldn’t have progressed as quickly to where I am today.”

Angela Roberts, Shaun’s manager at Solihull Connect, nominated him for the Solihull Bid award after she saw how hard-working Shaun was and how determined to succeed he is, even telling Angela, in his first week at the company that he hopes to one day progress to a managerial position within the company. Shaun received his award at the end of last year and Angela commented that she felt it was a natural progression for Shaun and she struggled to fit everything about Shaun into one application.

Shaun, who was also awarded student of the year twice whilst studying at Solihull College & University Centre, commented: “I couldn’t believe I had won. It’s nice to have recognition for my hard work. I never wanted to go to University and I knew that if I pushed hard enough I could gain experience and education with an apprenticeship.

“I would always recommend an apprenticeship as it gives you the vital information and experience you need to be able to survive in a work place environment. I would strongly recommend a customer service apprenticeship as it will hone your skills and techniques with how to deal with members of the public; just because you may not be in a customer service role does not mean the course will not come in use as everyone will have to deal with issues whether it be from members of the public of colleagues, the course will give you the ability to sort these problems out.”

Shaun has always felt passionate about helping members of the public and before he started his apprenticeship he had hoped to join the Police Force and felt his apprenticeship would be a good stepping stone to achieve that career. However, Shaun, now thoroughly enjoys his job with Solihull Council and plans to progress within the company. Nadia Davies, Apprenticeship Coordinator at Solihull College & University Centre commented: “Above all, Shaun’s genuine care towards his customers and his acknowledgement of how important each customer experience is outstanding. Shaun is continuously looking to the future and is now considering future possibilities to combine higher education with employment. Every organisation needs someone who cares as much about their customers as Shaun does.”

Shaun has impressed Solihull Connect so much that he has a personalised development plan which includes adding to his qualifications to become a team leader and then to progress to become a manager at the company. Shaun is now a mentor for the next apprentice at Solihull Connect and has certainly set the standard for his predecessors to follow. 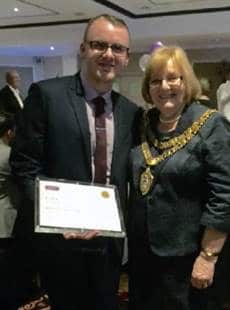