Matthew, who is currently studying towards his level 1 in carpentry and joinery at the College, entered this year’s competition after hearing about the competition from his tutor Arron Ward. This year marked the 10th anniversary of the SkillBuild competition in Birmingham, and saw nearly 100 trainees enter. The regional heat, which was the first of 14 regional competitions, took place on Tuesday 7th June and contestants hoped to secure victory to lead them on to the national final later this year.

Matthew was set his carpentry task to build a wooden frame; he had to draw the design out before proceeding to construct the design. Matthew was competing against a number of other students of mixed ability but stood out to the judges as he showcased his natural ability and skills within the carpentry industry and was awarded second place overall.

Matthew joined the College last year after leaving school and initially felt apprehensive as he wasn’t sure he was following the right path. However, he has proved himself over the course of the year to be an exceptional student, an opinion which is echoed by Matthew’s tutor at the College Arron Ward.

Arron commented “Matthew can work alone and problem solve above and beyond for someone of his age. After not being very confident in his own ability at the beginning of the year, Matthew now believes in himself, but still remains humble. He is a model student; he’s had 100% attendance and punctuality throughout the year.”

Matthew is hoping to progress on to the level 2 Bench Joinery course next year at Solihull College & University Centre before widening his options and looking to gain more skills in a different area of construction. 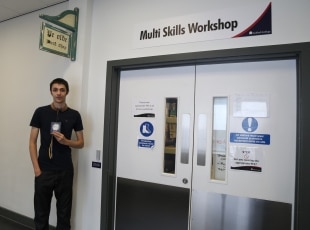