Larrie, who teaches aspiring young photographers at Solihull College, took a photo of the late David Bowie at a concert in 1973 and little did he know at that time that it would become quite an iconic shot.

Larrie comments “I took a picture of David Bowie with my first camera in June 1973, at a concert in Leicester’s De Montford Hall, when I was on a foundation art and design course. When he died recently of liver cancer, I wanted to raise money for cancer research, and have been selling the picture to staff here at Solihull College. So far I have raised £180 and have donated it to Cancer Research UK, at the Solihull Branch.”

Larrie wanted to donate the money raised to Cancer Research UK as he states they are at the forefront of cancer research and scientists at University College, London, have discovered a way to “steer” the immune system to kill cancers which could lead to potential vaccines to treat cancer, something which the money he has raised will go towards helping.

Larrie has presented the money raised to Cancer Research UK’s Solihull branch, who received it gratefully. 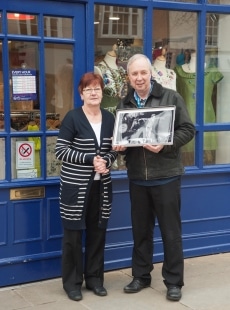