Charlie, who is studying towards his Higher National Diploma (HND) in Sports Science at Solihull College, has already started to make preparations for the upcoming game by visiting Northern Ireland recently to meet with his team mates. Charlie will now continue working and training hard before he makes the trip to Northern Ireland on 20th February.

Charlie has always been a very keen footballer and he had previously been playing for West Bromwich Albion, Birmingham City and Milton Keynes Dons Academies as well as the Northern Irish football team. When Charlie was playing for MK Dons aged 15, he was involved in a tragic car accident which left him in a coma for 6 months which was followed by a 6 month period in rehabilitation where he had to learn to talk, walk and perform basic tasks all over again which could have meant he would never be able to play football again due to his brain injury.

Despite this Charlie is still determined to succeed in his sporting career; he began to train and play for the West Midlands Cerebral Palsy team and then with the help of his father Charlie was able to secure a trial for the Northern Ireland cerebral palsy team where he impressed enough to be given a place in the team for the 2015 World Championships which was played at St George’s Park In Burton upon Trent, Staffordshire. Charlie jokes “I was a bit disappointed with that; I was hoping for a hotter location.”

After competing in the World Cup Charlie had concerns that the teams manager may have forgotten about him but after being reassured they could never forget about Charlie as he talks so much, he received the great news that he had once again been chosen to represent Northern Ireland in their upcoming fixture against Scotland in February. Charlie now hopes that he can impress in the upcoming match so he will be chosen for the away leg later in the year.

Charlie’s sporting aspirations don’t stop there as he is working hard at Solihull College & University Centre to gain his HND in Sports Science, commenting that many elements of the course interest and intrigue him. Alongside his course Charlie has already completed his Level 1 coaching certificate and hopes to move on to gain his Level 2 badge. Charlie comments that his long term goals are to coach top-level football and he is working on building his profile to make his aspirations reality.

For more information on the courses available at Solihull College & University Centre please visit the courses page or call 0121 678 7000. 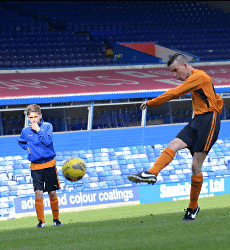