Tom graduated with Distinctions in all units, from Solihull College & University Centre this October with a HNC in Electrical and Electronic Engineering. As well as this Tom received a Special Award at his recent graduation which recognised his effort and commitment throughout his course as an outstanding student. Tom showed great enthusiasm over his course and his tutors were able to instantly recognise his talent within the engineering sector as well as his ambition to succeed.

Due to Tom’s hard work he has now been shortlisted for the CIBSE West Midlands Education Award, which is a great achievement. The winner of the award will be announced on 4th December at the CIBSE Annual Dinner at the ICC, Birmingham.

Tom, who has already started his career in the engineering industry with Couch Perry Wilkes, also has another passion of canoeing and competes for Great Britain and aims to be able to compete in the Rio Olympics next year.

It is clear that Tom has great aspirations to be successful in not only his sporting achievements but also his career prospects. Tom has now progressed on to Coventry University to gain a full degree in Engineering.

For more information on the engineering courses available at Solihull College & University Centre visit the open event on Wednesday 2nd December between 6pm-8pm or call 0121 678 7000. 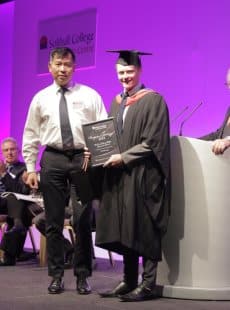