University level students at Solihull College & University Centre have taken part in a 36hour game jam as part of the UKIE Student Game Jam competition recently.  UKIE are the trade industry body representing the games industry and it is therefore a great thing for Solihull College and its students to be involved in.

The competition saw two teams of six students, who are currently studying towards their HND in Games Design at the College, competing against a number of other colleges and universities around the UK. The task was to design, develop and release a game in just 36 short hours.

The Games Design students at Solihull College were given the theme of ‘Utopia’ on the morning of 4th April and set straight to designing their games. Students were given industry mentors to assist them along the way and staff from the College’s computing department got stuck in too.

The students were able to use their design and programming skills learnt on their Games Design course to complete the task. This year’s competition was the biggest yet and saw a lot of great entries and was a very tough competition.

Course Leader for HE Games Design at Solihull College & University Centre, Simon Hunt, was part of the event at the College and commented: “It was a fantastic experience and a brilliant learning experience for both staff and students alike. Students worked extremely hard in the 36 hours and developed two very different but interesting games. I’m proud of both teams involved and we hope to be back again competing next year.” 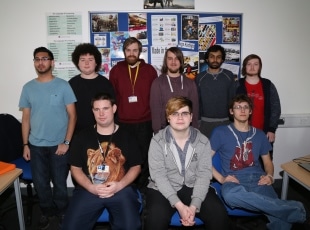