The ceremony saw graduands from a variety of courses including animal management, business, childhood studies, engineering, sport and many more turn up en-masse to celebrate their achievements over the past few years.

Chief Executive of Birmingham Chamber of Commerce, Paul Faulkner was invited as guest speaker for the evening and was able to inspire the graduates from the class of 2016.

Paul was invited onto stage by Vice-Principal of the College, Pete Haynes to address the graduates. Speaking about their future and the uncertainty of Brexit, Paul also spoke of the great things to come in Birmingham, including HS2 and how the facilities at the College will enable the next generation, including this year’s graduates, to thrive in the city.

John Callaghan, Principal and CEO of Solihull College & University Centre and President of the Solihull Chamber of Commerce commented:

“It was a great honour and privilege to have Paul at our recent graduation. It is a time where we celebrate the achievements and hard work of all of our students and having a successful businessman like Paul present, really helps to inspire our students.

“Paul spoke of the great opportunities which will be coming to the region in the coming years and I can only echo his comments that it is a great time to be a part of the region. Our graduates will be able to take advantage of the numerous developments occurring within Birmingham and after gaining their qualification with Solihull College & University Centre are fully prepared to succeed within their chosen industries.”

The evening was a great success with tears of joy from proud parents, cheers of happiness from the graduates and pride beaming from everyone in the room.

Our sponsors, University of Warwick, Beechwood Childcare, Couch Perry Wilkes, Oxford Brookes University, Coventry University, Pearson, Birmingham Airport and Prime Accountants Group attended the graduation and were able to present awards to students who had shown extra commitment and effort during their studies, along with our distinguished guests Councillor Mike Robinson – Mayor of Solihull and the Deputy Lieutenant of the West Midlands.

Two new awards were also introduced this year: the student alumni award which is awarded to a past student who has done exceptionally well within their career since graduating from the College, this was awarded to Tomasz Janiga who now works as a Project Development Engineer for a Non-Destructive testing company working with cutting edge technology and Tomasz returns to the College giving advice to current students.

The second new award was the Helena Stockford award. Helena, known as Lena, was the Chair of Governors at Solihull College & University Centre and unfortunately passed away suddenly earlier this year. Tribute was paid to Lena at the ceremony, with her family attending to present the award to student governor winner, Scott Beasley.

The ceremony was a great success with students achieving outstanding results which enable them to progress to their chosen career. 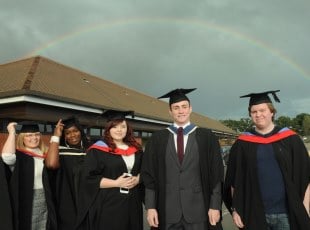