Graduates from Solihull College & University Centre celebrated their achievements at the College’s annual graduation ceremony on Monday 6th November at The National Motorcycle Museum, Solihull. Arriving at the ceremony with family and friends, students celebrated the end of their higher education journey.

The ceremony had around 1,000 people in attendance, including Mayor of the West Midlands, Andy Street who delivered a motivational speech to the students, presented them with their certificates and congratulated them on their outstanding achievements.

After speeches from the College’s Chair of Governors, John Bolt, Andy Street and student speaker Scott Beasley, students who had performed outstandingly over their course were presented with a number of sponsored and special awards. Sponsored by some of the College’s close employer partners, these were gifted to students for triumph over adversity, amazing improvement, extraordinary commitment or academic excellence. The awards culminated with the two most prestigious of the evening The Mayor’s Award presented to Jamie Harrison and the Lord-Lieutenant’s Award presented to Sean Evans.

Jamie Harrison, who graduated with a BSC in Applied Sports Science benefitted from hugely successful work experience at Coventry City Football Club. His dissertation assessed ‘the impact plyometric training and reactive strength index has on speed’. His findings resulted in modifications to the first team players’ training.

Sean Evans, who graduated with a HNC in Construction & the Built Environment (Civil Engineering) contended with a number of personal circumstance changes whilst studying. He became a father for the second time, lost two family members which included a close family member battling with a terminal illness and had to contend with other family issues concerning custody of his nephew. He persevered ensuring he kept on top of his work and managed to juggle all aspects of his life in order to graduate.

This year a special award was also created to honour the memory of College science tutor Jill Calderbank who recently passed away. The award was presented to Angela Morris, a high achieving Science student who Jill herself had interviewed during her application process.

College Principal John Callaghan closed the evening with advice to the graduates about keeping their own individuality and originality as they go out into the working world. 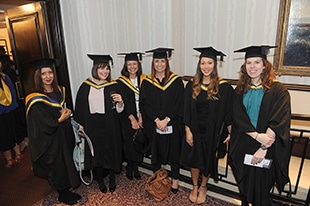