On Tuesday 21st June Solihull College & University Centre’s Blossomfield Campus were delighted to host a visit from the Secretary of State for Education Nicky Morgan and the Rt. Hon. Julian Knight MP. They met a group of students representing different areas of the college and held a question and answer session on the EU referendum.

Both Nicky Morgan and Julian Knight were welcomed to the College by Principal and Chief Executive John Callaghan before enjoying a tour of the campus and being given the opportunity to meet with current students of the College.

The students were able to listen to Nicky Morgan’s views on the EU referendum and how the decision could impact upon education with the UK. The College then hosted its own question time, allowing students from a variety of subject areas to direct their questions and queries to both Nicky Morgan and Julian Knight.

The students engaged extremely well in the debate, asking a number of questions in reference to the Brexit and Bremain campaigns including factors on immigration, education, social housing, the NHS and trade.

Nicky Morgan thanked the students of Solihull College & University Centre for presenting her and Julian with so many great questions and was impressed with how engaged the students were in the referendum.

Principal of Solihull College & University Centre, John Callaghan commented: “This provided a great opportunity for our students to be involved in a lively debate and have the opportunity to have their questions about the EU referendum answered. It is extremely important that young people feel they are listened to and have an opinion on such matters, and I was thrilled to see that so many of our students were thoroughly engaged with the debate.”

For more information on the courses at Solihull College & University Centre visit the courses page or call 0121 678 7000. 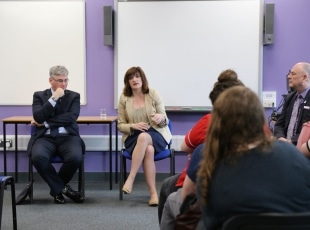