Solihull College & University Centre works in partnership with Solihull Moors Football Club to offer students at the College the chance to play football and gain their qualifications at the same time; combining sport with education.

The College’s football academy has been running since 1998 and produced many successful athletes in that time and this year is no different.

Recently, academy player Kieran Dawes has been offered a scholarship at Birmingham City Football Club. Kieran was part of the Birmingham academy throughout his childhood. Just last year left the academy and began his time at Solihull Moors playing in the reserves team. Academy Manager, Mark Fogarty had worked with Kieran for many years and knew the potential he had to progress within his footballing career.

Kieran has now made his move from the academy and Solihull Moors to start his career with Birmingham City and is the first academy player from the College to do so this year. The academy expects that many more players will soon be following in Kieran’s footsteps.

A modest Kieran said of his return to Blues: “I have been working really hard to return to Blues and am delighted to have achieved that goal. I learnt a lot playing at Solihull Moors and then being part of their Academy. My next ambition is to progress towards a professional contract with Birmingham City.”

With success such as this within the first month of the new academic year it leads on to a very exciting future for the College and its academy players.

For more information on the courses available at the College and the football academy visit the courses page call 0121 678 7000 or visit the open day on Saturday 28th November between 10am-2pm. 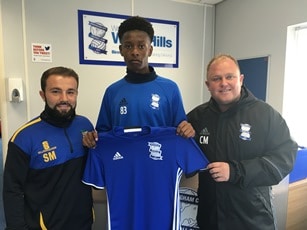