Both students applied and were selected to present at the conference through the Oxford Brookes University ‘GetPublished!’ initiative, which helps students present their work to a wider audience. Stephen’s work was presented via video so he could present at The British Conference of Undergraduate Research in Sheffield on the same day. The conference was attended by over 400 undergraduates and university lecturers.

Elaine and Stephen both had the chance to view other students’ research as well as being able to discuss their own work with others. Local employers also attended. Stephen’s work, “An investigation into the cognitive abilities of Harris’s Hawks (Parabuteo unicinctus) and the potential impact on the species enrichment in captivity”, investigated how intelligent Harris’s Hawks are, using a variety of string pull tests on 3 Harris’s Hawks. Overall, Stephen’s work found there was evidence to suggest Harris’s Hawks have trial and error learning patterns, which proved that Harris’s Hawks do have higher cognitive function abilities.

Elaine, who is in the final year of her foundation degree was also accepted to present an academic poster presentation of her research. Her informative research was on “Sleep Deprivation on Children, Adults and the Impact on Early Years”. ‘I think people naturally assumed most submissions would be from Oxford Brookes itself, so I wanted to put our college and Solihull forward’ Elaine states. ‘It was great to create a permanent, openly accessible online record of your research. It’s rewarding to feel that the research we carry out is worthy of promoting. It helped me solidify my thinking’.

Elaine is a parent herself to two young children. She observed that there was a lack of support available for parents after children are born. Elaine hopes the outcome of her research findings could mean she can provide accessible authoritative facts that are non-judgemental, purely NHS information from key thinkers to assist parents without them needing to do a course.  She has applied for a grant to see if she can turn her idea into a reality.

Stephen who volunteered at a Falconry centre for the past year intends to stay on at the college and study for his top-up degree, where he would be awarded a BSc (Hons) Animal Behaviour & Welfare. He then intends to study onto master’s level and pursue a career in animal research.

‘This was a project I was really interested in researching as I found the cognitive abilities of Harris’s Hawks fascinating’ Stephen stated. ‘I’ve found my course great as it included lots of in-depth content. The staff at Solihull College & University centre are fully knowledgeable and very hands-on, which made this such a worthwhile course’. 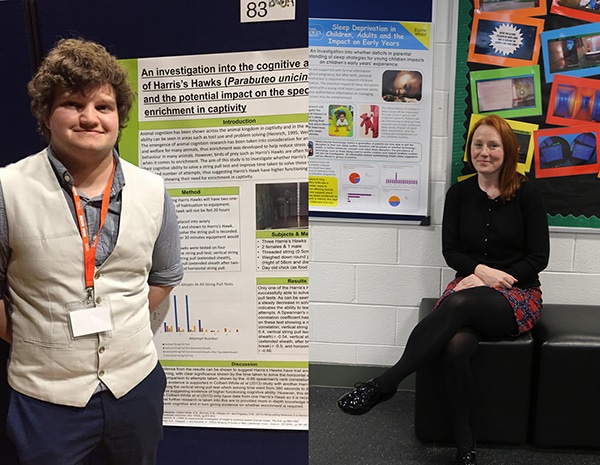