Our HND Graphic Design 2nd year students recently attended The Student Starpack Awards in London on 28th June to receive their 2 gold awards, a bronze award and a ‘Best in Show’ Gold award.

The Starpack Awards scheme has been running since 1960 and is the premier UK annual award scheme recognising innovation in packaging design and technology.

Elizabeth Parker and Hattie Mills, each received gold awards for their individual work, designs to the brief ‘Cart & Board – Health in a hurry’. ‘I wasn’t expecting to win, it was amazing’ stated Hattie ‘we were given a lot of freedom to make the brief our own and were really able to find our own individual style and branding within the brief’.

Josh Fairburn, had to merge the physical and digital world together for Coca Cola, he used a snapchat style created app, ‘Snap a Coke’. Once the coke was photographed an animation or graphic came out of it. Merging both the digital and physical packaging to answer one brief, Josh used Adobe After Effects to create the ‘app’ idea. He received a bronze award.

Daniel Pickerill had to create a luxury vodka packaging. Daniel created a bespoke design out of tin plate. He moulded and spray painted his packaging to create ’64 degrees North’ his personal Vodka branding. Teaching himself metalwork Daniel’s hard work and talent paid off and he collected the ‘Best in Show’ award. Judges praised the beautiful execution across all components and described Daniel’s entry as a “stop in your tracks” entry and Daniel himself as a ‘designer to watch’.

The 4 students and their tutor Neil Duffy attended the awards to collect not only their own award but also the Eric Dickens Memorial Award for the College for ‘The Institution with the most qualified entries’.

The successes in Graphic Design work bodes well for a bright future. Industry recognition from esteemed awards such as the Starpack Awards proved the perfect culmination of the year. Tutor Neil stated: ‘These awards are very much industry driven, with challenging briefs – so we are very proud. There is the option to go forward to apply for the Worldstar Awards which I hope our students will go on to do. They certainly have the talent and skill which these awards prove.’

The Worldstar awards are available for consideration to any entry that has won a regional Starpack award and offers an international award in packaging. 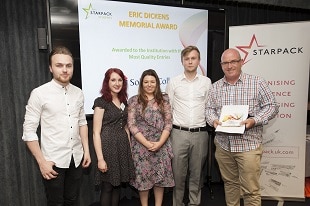