Graphic Designer Steve made the journey to Tanzania in Africa to begin his climb to the summit in order to raise awareness and as much money possible for The British Heart Foundation.

Steve began his trek on 3rd September and endured temperatures of 35 degrees in the rainforest and -20 degrees at the summit over the course of his week-long challenge. Steve was able to persevere through the tough climate and overcome the challenge by reaching the top of the mountain.

In order to raise as much as possible for the charity Steve also held fundraising events prior to his challenge and along with sponsorship this led him to collect an impressive £4825 including gift aid for the British Heart Foundation. 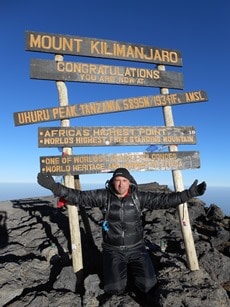