Her course culminated with exhibiting her finished project at a College exhibition and entering the Inspire 2018 Youth Art Competition. The theme of the competition was “we love colour” and out of 401 entries, Sophia’s painting was a runner up.

Sophia’s original idea for her final college project was to explore how often the homeless were ignored by the rest of society. She made a vow to showcase this issue and in turn, turn the invisible visible. She researched the topic extensively. This research and passion would later enable her to create a moving work of art in an attempt to open people’s eyes to homelessness. Sophia’s project was in direct opposition with her usual work which tends to be quite personal. Sophia felt it was an emotive topic that would capture the attention of her audience.

She initially headed to the streets of Birmingham where she identified a homeless man to talk to. She brought him food and in exchange, he spoke to her about his life. She found that he only turned to drink after sleeping on the streets, and before the streets, drugs were not a problem he had. He wanted to convey that this is a common misconception people have of homeless people – that they have always been involved with substances. Rather, substances are at times used as a coping mechanism for life on the street. Sophia also talked and worked with another man, who had a sixteen-year-old son. He didn’t want to see his son in his current state.

Sophia knew that in the art world being painted is often a luxury afforded only to those with wealth, so decided to paint the two men. ‘I wanted people to connect with the piece’, Sophia states; ‘I hoped it might make people question their thinking. I always wanted to bring my homeless subjects out of the background and as a result hoped it would help people to notice them’. Sophia cites English contemporary artist Tracey Emin as her inspiration. The final project piece itself is made from a collection of recycled material, which relates to the fact that ‘homeless people have to make do with what they’ve got’. The portraits of the two men feature either side of a central door. Sophia’s piece was a direct response to negative articles and perceptions from the press and as such the door was covered with parts of newspapers features.

Sophia, 18, states ‘I would not be where I am now if I had taken A-Levels, I really believe I’d have been unhappy. At college, I was given great one-to-one support.’

The 18-year-old student has high ambitions for the future. She is now going to Manchester to study a three-year degree course in Fine Art and hopes to build her career as an artist. Her advice for budding artists?  ‘Never give up. Believe in yourself and your work’.

If you like the sound of Sophia’s journey, then why not apply to come and study an art course at Solihull College & University Centre. 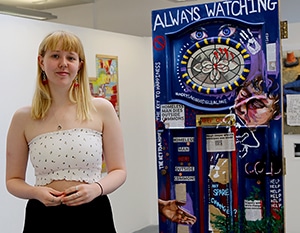