The Starpack awards give students the opportunity to showcase their work and compete to gain recognition for their designs. Students are tasked to choose from a selection of briefs assigned by the competition organisers which allows students to put their skills into practice with real world packaging designs.

The students from Solihull College & University Centre entered into different categories including ‘Grow your own Culinary Herb Kit’, ‘New use for Corrugated Board’ and ‘Squash’d’ where they were tasked to design packaging for their specific product.

Kellie Murray and Jordan Wedgbrow were both awarded with the bronze award in the ‘Grow your own Culinary Herb Kit’ with their designs receiving compliments from the judges. Jake Reeves was awarded the bronze award for the ‘New use for Corrugated Board’ with judges stating his design was functional and a good use of corrugated board. Finally, James McFerran was awarded with the gold award with his ‘Squash’d’ design as well as the Britvic Sponsored Award and received a cash prize for his design. The judges identified that James’s model, graphics and construction were absolutely fabulous and the amount of work that went into the development was fully recognised.

The students were able to attend an awards evening for the Starpack competition at the National Space Centre in Leicester to receive their awards. All 4 students studied their HND in Graphic Design at Solihull College & University Centre and will be looking to begin their top-up year to earn their full honours degree shortly.

For more information on the Graphic Design courses available follow this link or call 0121 678 7000. 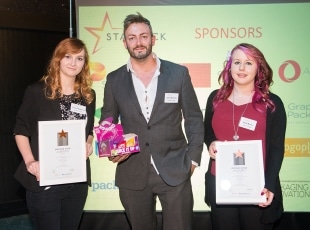