Solihull College & University Centre’s carpentry students have again secured victory in the Institute of Carpentry competition for the fourth year in a row.

The students received the results from the Institute of Carpenters recently and were elated with the results. Frankie Vanes finished 1st in the under 20s category with Matthew Welch finishing a close 2nd. In the over 20s competition Liam Rogers claimed the number one spot for his efforts.

The students were given the drawings as part of the craft competition hosted by the Institute of Carpenters which is the only national competition open to students of carpentry, joinery and shop fitting and sees over 200 colleges competing nationwide. The judging of the competition is completed by leaders within the field so the students had to pull out all of the stops to impress.

The task this year was to use the drawings provided to create a framed, ledged and braced door; this is something that is usually taught to students studying at a higher level but the five students at Solihull College & University Centre didn’t let that put them off.

The group admittedly had a few difficulties but were able to drawer on the knowledge of construction tutor at the College, Arron Ward encouraged them throughout, pushing them to succeed in the competition.

Winner of the over 20s category Liam Rogers, who tutor Arron describes as an outstanding model student, commented “I didn’t believe I would be the one who won the competition. I’d have never thought I would be where I am now; the College has given me a huge confidence boost.”

Frankie Vanes, who claimed top spot in the under 20s and both Frankie and Liam will be now competing at the national competition later this year. 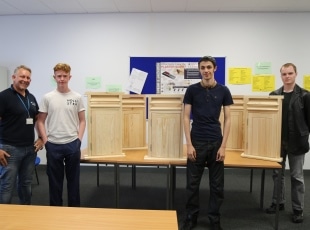