The students worked with Rolls-Royce to gain an in-depth experience in science, engineering and technology, allowing them to learn new skills which they will be able to take into their future careers.

The four College students, along with Rolls-Royce graduates, worked to develop a visual inspection tool to improve the efficiency of production testing on the G5000 variable stator vane actuator; an integral component in the Rolls-Royce XWB engine.

The prototype is likely to be used by Rolls-Royce in the future as it is expected to save the company not only time but a potential £15,000 per annum.

Because of the success of the teams work, they have now been selected by the EES to progress to the Midlands region’s semi-final in order to be considered for selection for the Future Industry Leaders awards which are to be held in London in September. 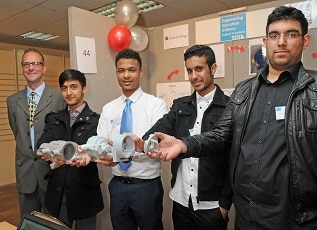