Solihull College & University Centre’s hugely successful Ladies Football Academy is run in partnership with Birmingham City Ladies FC to find and nurture the best talent from across the region, combining football with a top-quality college education.

With many of the academy stars progressing into their professional careers, the College is looking for the next set of aspiring footballers. Trials for the next academic year will be held on Wednesday 22nd February, 11am-1pm at the College’s Blossomfield Campus in Solihull.

The ladies football academy has been running since 2012 and has produced many successful players who have gone on to represent England at a variety of levels as well as top clubs around the country.

The academy has 8, both previous and current, players who have been selected as part of the Birmingham City Ladies first team in the Women’s Super League and it continues to produce successful sportswomen year after year.

The team has also been very successful in cup tournaments as the College team have won 5 national titles in the last 3 years. The team currently sits top of the National League and are in the Semi-Final for the National Cup for U18’s where they will face Oaklands College on 1st March.

Many of the ladies currently playing for the academy have been selected to represent England Colleges and others have secured their place in the England International U19 squad. Ellie Brazil and Chloe Peplow have made their debuts for the U19 team. Ellie comments: “Playing for England is a surreal experience. For me, my priority is club football but being able to represent my country is special and something that I will never forget.”

In reference to the academy, Ellie adds “It’s important to me to get my qualifications as well as work my way up in football; it’s important to get the right balance and the academy at the College allows you to do that. I would recommend the whole set-up at the College with being able to study and play football; it’s perfect for people who know they want to get into sport.”

The academy has also just received news that current player Shania Hayles has received her international call-up for the England U18 squad.

Former academy players, such as Blues Ladies defender Jess Carter, will be present at the upcoming  trials to talk to the hopefuls about their experiences whilst playing and how they have progressed onto professional football.

Places at the upcoming trials must be booked in advance. Please email Philip.trilloe@solihull.ac.uk or call 0121 678 7000 for further information. 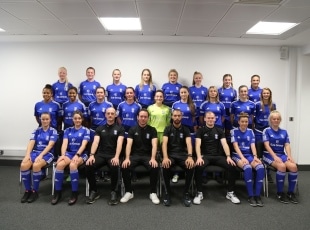